Let's face it for people my age the inclination of the blizzard of '78 has really been a story that our parents, and our parents parents have talked about over the last 35 years. My mother described her experience as both scary and fun. She said she and her siblings could jump from the second story windows and land relatively safe, because the snow was so high. For those of us who didn't live through it, it's always been something of a white faerie tale. Today proved nothing short of a faerie tale. Although I still think that Nemo falls short of the '78 experience;mind you we are still in the hype of the storm, and it may prove me otherwise.

Being a photographer I felt it necessary to take certain risks, so that this storm had it own sort of historical documentation. Although I don't think people will ever forget it, especially with it's unique name Nemo. If you have children or nephews and nieces and haven't found Nemo yet you've missed out. I digress.

My first inclination in hearing about the storm was to grab my close friends and hit up the store for some sleds. You're never too old for sledding. My friends on the other hand were really bred more for the beaches. At the sheer mention of wet snow their faces turn quickly into a horrified almost insulted look. With my boyfriend ( A fellow sled advocate), being part of the Army National Guard and on active duty for the blizzard I settled for the next best thing. I grabbed my camera and headed out in the white dunes of Nemo.

Not without proper preparations of course. My father always said it doesn't matter what you look like so long as your warm. I over the years have adopted this motto in the most perfect sense. So much so that when I started to tread out the door even he failed to hold back an amused smile. I guess two pairs of sweat pants, snow pants, three shirts, a white ear flap hat, a hat-scarf, black snow boots that go up to my knees, a turquoise jacket and reflective vest for safe treading may have warranted it. No I didn't forget mittens, I needed my fingers free for the camera. Now I'm not quite large so picture an elf size human in the described outfit treading on the sidewalk in knee deep snow totting a camera with a minimum 20 mile an hour winds and snow continuing to fall. I think you get the picture.

My Camera of course, well that's hard to dress. I had to settle with a plastic bag with a hole punched in the middle. Which I might ad was not as handy as I had hoped. It would have acted great as a sail, as it kept acting like one and trying to take my camera away with it, as I knelt in the corner cusp of the road to take pictures of the storm.

The best way to describe the experience was simply, an Alaskan storm. I truly felt walking down my cobbled pathway into the knee deep snow that I was living in Alaska. The cities I must say are doing a substantial job ad continuously clearing the roads. In this weather an inch think snow blanket is much better than where it could be. Treading on the sidewalk I found was the safer of the available options, even with the reflective vest. Lets face it I'm small and I don't prefer to be taken out by a plow.

I have to admit in this scenario it wasn't so much about capturing a great image. Let's face it the weather won this war. It was more about capturing a piece of the heart of the white storm. Tomorrow may yield some captivating images of our rural little city covered in snow. The images provided are from standing in front of my home, my city street and then 35 feet down where the high school lies. The high wind and white dust definitely remove one's ability to see much of anything. Again the plows have kept up a great deal with clearing the roads steadily, but looking at the sidelines you can see the accumulation.

My frost bitten fingers will heal and be forgotten, as our bodies are programmed to forget pain, but this storm and these images most likely will not. (As a side note in the fifteen minutes between me leaving and returning my 5 inch book marks were almost completely covered). Stay tuned for more image of the aftermath tomorrow, as I'll be rising bright and early to see where Nemo has left us. For a city that's named "The City on the Go," walking back towards my home I have to say it was definitely a city in pause. 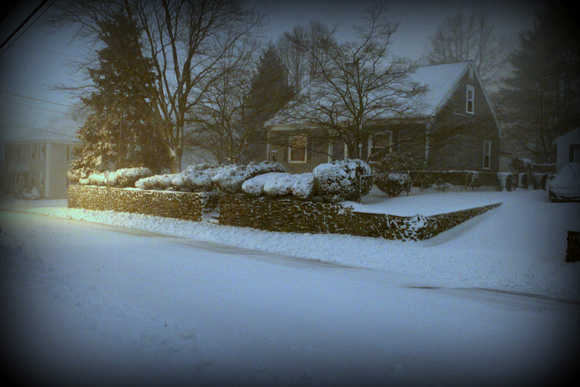